Damonza > Articles > Uncategorized > How to Make a Living as a Novelist

How to Make a Living as a Novelist 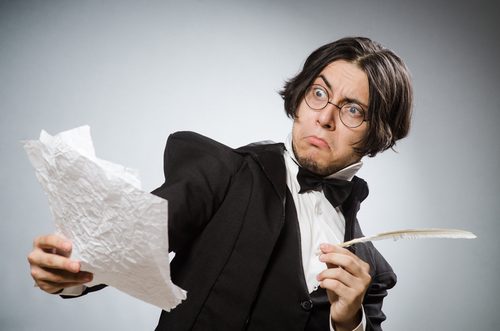 How do you make a living as a novelist? Turns out it’s super simple, you guys.

Step 1: Find a big cardboard box. One designed for a large home appliance (a fridge/dishwasher) is perfect.

Step 2: Collect up some newspapers – the drier the better.

Step 3: Lie down in the box, and cover yourself with the newspapers. You are now living within your means, and are free to write/shout at passing cats to your hearts content.

Am I painting an unfair picture of a novelist’s life? Perhaps. But as any good salesman will tell you, it’s best to under-promise and over-deliver. And, in reality, this portrayal is not entirely off the mark.

Let’s look at the stone cold novelist-earning-potential realities. The top 2% of authors make what might be termed as a ‘good living’ (US$100,000 per year). But the overwhelming majority, 77% of self-published authors and 54% of traditionally published authors, make less than US$1000 per year. They simply cannot sustain themselves on writing alone; they have a day job, a partner who works, a healthy inheritance to live off, or they find themselves under a bridge in the packaging of an LG French door refrigerator.

This has been the case for novelists since time immemorial, and more than likely will continue to be. It’s a field that rewards its top performers stunningly, but anything less than perfection results in a dismal pay check. In fact, even perfection can be overlooked (case in point: John Kennedy Toole).

There are jobs that pay well for middling performance. Writing, my friends, is not one of them.

Well that’s all very depressing, but for some ungodly reason you’re still reading this thing. Congratulations grasshopper, you’re likely made of the right stuff. For the very same survey that produced the average earning figures for novelists also found that only 20% of respondents listed making money as ‘extremely important’. Most writers simply love what they do, and earning potential comes a distant second to pursuing their passion. If a day job, be it part-time or full-time, needs to be taken up to allow a novelist to write, they don’t think twice.

The Traits of the Top 2%

But making a living out of doing what you love is the obvious ideal. So what separates these good earners from the stock standard author on the street? Well, a few common characteristics that you’ll find in this upper percentile include:

So you think you’re made of the right stuff? You’re willing to risk a life in cardboard for a shot at that J. K. Rowling country estate? As you wish.

So what’s next? Well, first up, you need to produce a novel. And not just an unedited jumble of words that represents a first draft – I’m talking a cut, dried and polished piece of other-worldly magnificence.

Once your manuscript is in order, it’s time to make a big decision: traditional or self-publishing?

Still the gold standard of publishing, getting your book bound by a traditional publishing house also represents the safest avenue to writing riches. But it’s also, unsurprisingly, the hardest to get into. In order to jimmy the door open, a good agent is a must. But obtaining said good agent can be just as difficult as obtaining a publisher, which is why your novel needs to be looking its very sharpest.

An agent will be bombarded by aspiring authors whose works are almost there. But why would they take a chance on a slightly underdone manuscript when there’s another one that seems ready to print? Make sure yours has been carved, massaged, sanded, buffed, polished, waxed and spit ‘n shined before you send it out anywhere.

There’s no guarantee that a good agent will be able to sell your work to a publisher, but if they do, they’ll take around 15% of your earnings. You’ll be asked to sign a contract by the publisher that includes a payment schedule. A standard arrangement goes along the lines of: 25% upfront, 25% on delivery of the manuscript, 25% on acceptance of the final draft, and 25% on publication.

The publishing house takes care of all of the costs of producing, marketing and distributing the book, but also takes the lion’s share of the profits. It’s a low risk, low reward deal for you, and a high risk, high reward deal for them.

For those looking to forge their own path, self-publishing has never been easier. With Amazon allowing anyone and everyone to offer up their hard-earned words to the baying public, any Tom, Dick or Harry can now instantly become a published author.

The drawbacks of self-publishing soon become evident though. There are upfront costs for editing, formatting and cover designing (for the long-term success of your book, it’s essentially non-negotiable that you outsource these jobs to professionals), and you’d also be wise to formulate some sort of marketing strategy. Once you’re comfortable with the finished product, it’s a simple matter of uploading it to Amazon, B&N or any other online book retailer.

In the world of self-publishing, the responsibility of getting everything right sits firmly on your shoulders. A bad cover, inconsistent formatting, bad editing; if a small issue prevents your book from selling, the joke’s on you. You essentially take on the role that the publishing house takes in a traditional publishing scenario – high risk, high reward.

With your path to authorship lit, do you dare walk it? If you do, ensure those expectations are tempered. It’s important to realise that novel success isn’t measured by copies sold, nor the square footage of your abode. If a passion for writing truly pumps through your veins, it’s the process, not its rewards, that will draw you in and keep you hungry.

And if you can see yourself happily sitting in that cardboard box under a bridge, penning prose while wastewater casually carries dead animals out to sea, you might just make it in this game.

Hey! While you’re carving out your writing empire, take a look at this useful article: How many books would you need to sell to make $20,000?