What’s the Difference between Print and eBook Covers? (Part 2) 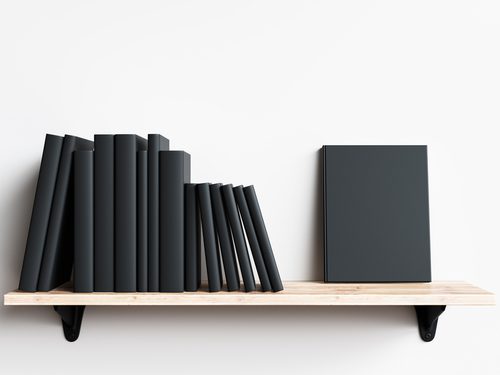 Last year I stole 5 minutes of your valuable time to explain why eBook covers are different to print covers, despite the awkward fact that both are designed for the sole purpose of covering your book.

But not satisfied with explaining an eBook cover’s lack of spine, back and texture, their need to convert to monochrome, and their presentation as thumbnails, I’d now like to switch sides, and tackle the problem in reverse. How is a print cover different to that of an eBook, aside from the points raised ever-so shrewdly and succinctly above?

So without further ado, here is a sequel that I feel has the potential to be every bit as memorable as The Godfather Part II or Sister Act II: Back In The Habit.

You gotta shoot for the stars, kids.

The focus on the spine

No matter how you publish your book or where you sell it, it’s reasonable to assume that the first thing that a potential reader will see will be your front cover. On Amazon and other online retailers this is most definitely the case, albeit in thumbnail form. But what about for print covers in brick and mortar stores?

In truth, if you’re selling your book in a retail store and you’re not one of the top dogs, you’ll most likely be placed spine out style on the shelf. The front window work will be left to your Stephen Kings and J. K. Rowlings, and the front-facing books on the shelf will generally be whoever the big publishers feel compelled to push. Until you pull a self-promotion switcheroo, that is. If you’re an author who hasn’t brought their own work to the front of the shelf, are you really an author at all?

So not only do print covers boast more vertebrae than those spineless bloody eBooks, they also rely on that spine to sell themselves more than most authors might imagine.

The dots per inch

Dots per inch (DPI) is a measure of clarity for a printed or reproduced image. eReaders, what with their low resolution screens, generally require lower clarity covers (approximately 72 DPI) than physical books do (300 DPI).

Why the hell does all this technical talk matter to you, the author? It’s just a friendly reminder that slapping your eBook cover on your print book will probably make it look as though it’s been slowly spat out of one of those delightfully loud dot matrix printers, the sound of which still haunts the dreams of anyone aged 30+.

While we’re on the print quality train, let’s make a quick stop at colour format station. A digital cover is designed and produced in RGB format, the same colours as used by electronic screens – red, green and blue. The CMYK format – cyan, magenta, yellow and key (black) for those of you playing at home – is used for anything that is printed in ink.

These formats have a tendency to produce ever so slightly different results. Carelessly converting an RGB eBook cover to a CMYK print cover can have an adverse effect on the look of the image, most commonly making it darker, but sometimes producing a notable change to colour.

You’ve bled for this book. Unfortunately, printing it might see it bleeding right back at you. Print covers must have bleed lines placed around the edges – these lines act as a buffer zone, guarding against slight printing shifts. Any imagery that strays into the bleed lines should be inconsequential (i.e. part of the background), and no text should extend into them.

Quoth CreateSpace: “Every book will vary slightly when bound. Allow for 0.0625″ variance on either side of the fold lines for your cover. For example, if your spine width is 1″, your text should be no wider than 0.875″. Because of this variance, avoid hard edges or lines that end on the fold line.”

In other words, you need to set aside a space that is 6.25% of the total size around the edges of your spine and cover to allow for potential bleedage. Not a fan of mathematics? I don’t know what else to tell you. Maybe find someone with glasses to explain it.

So there you have it. Book Cover Differences Part Deux. And if I’m not mistaken, there’s a distinct smell of trilogy in the air. If The Godfather franchise was worth ruining in a blatant grab for third movie cash, this one is too.